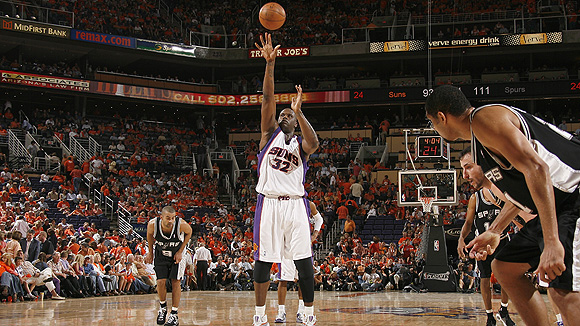 Hall of Fame basketball coach Jerry Steele told this story. When tryouts were allowed, he had a young man in the campus gym, demonstrating his shooting ability.  Showing very limited success, the young man stopped and commented to Coach Steele: “I’m sorry I’m doing so poorly coach, but you make me nervous.” Coach Steele replied, “Well, my intentions are to be at every one of our games.”

Pressure is emotional.  Controlling your emotions is part of getting positive results. Just as you have to master the physical part of the game (conditioning, skills), and the mental part of the game (strategy, rules), you must train yourself to control your emotions. In sports your two primary negative emotions are fear and anger, and both are self directed. The only way to learn how to play under pressure is to play the game competitively. The game is the best teacher.

Pressure affects momentum in sports.  One of the hardest things to learn is how to play when ahead.  “Killer instinct” may sound mean, but playing well while you’re ahead prevents having to deal with momentum and pressure shifts. Nevertheless, all elite athletes get into pressure situations. Some love pressure, but my guess is that they have spent years preparing themselves for these moments.  Every backyard basketball player has mentally placed himself on the free throw line, with the score tied, and the clock set to expire. All good tennis players have had to hit a second serve defending match point.

It is astounding how many pro football games end with a field goal attempt. The same is true of basketball: the lowest percentage shooter on the line with the score tied, and 2 seconds left on the clock. While field goal attempts vary in length and field conditions, free throws are the same distance universally.  And, indoors, they are not affected by weather.  They are not immune, however, from pressure.

Finding golf late in life, I had already experienced the carry over of skills and ideas from sport to sport. Dave Pelz is golf’s short game guru.  His book “Short Game Bible” is a must for learning golfers.  Pelz notes that conversations between pro golfers and their caddies don’t center around tens of yards, but yards themselves.  They want the approach shots within 8 feet of the cup, where putting odds drastically improve. He reveals the term “omigods” which refers to golfers hitting putt too hard with their hand muscles.  These hand muscles, plus pressure, can affect putting distances in amazing distances.

Pelz’s solution is to take the omigods out of putting by employing a “dead hands” technique.  The length of the putt, or pitch, is determined by the length of the stroke.  While golfers who are good putters have a good touch, Pelz scientifically shows how “pendulum putting” comes from the shoulders, not the hands.  Others suggest length of putts comes from varying body rotation lengths, rather than the hands.

My suggestion for basketball coaches is to explore the success of “dead hands” golf putting as it applies to basketball free throw shooting. Even in pro basketball I see all kinds of hand actions, affected by nerves and pressure.  These poor shooters with jerks, flips, or omigods in their shots are sought out and fouled at games end.

There are at least three main variables that control free throws: the legs (how far to bend, how far to rise.), the arms (how low to take the ball), and the action of the hand and the wrist. Shooters should use a cupped shooting hand with the ball placed in tips of their fingers and thumb. The real key to success is learning the proper wrist action in the shooting hand. Here the great coaches will be able to convey just the exact “dead hands” release by the shooting wrist. All good free throw shooters have a pre-shot routine, like golfers, or tennis players, or field goal kickers.  Experts say 8 seconds is maximum for a pre-shot routine.  Any longer and you will lose your mental target.

Bjorn Borg’s comments upon winning on of the greatest tennis matches ever, 1980 Wimbeldon final over John McEnroe, were essentially these: “I was very nervous inside. I thought surely I will lose this match. I told myself I must put these thoughts out of my mind.” And, most importantly, “I will not quit under any circumstances.”

One thought on “Golf Putting and Free Throws (13)”